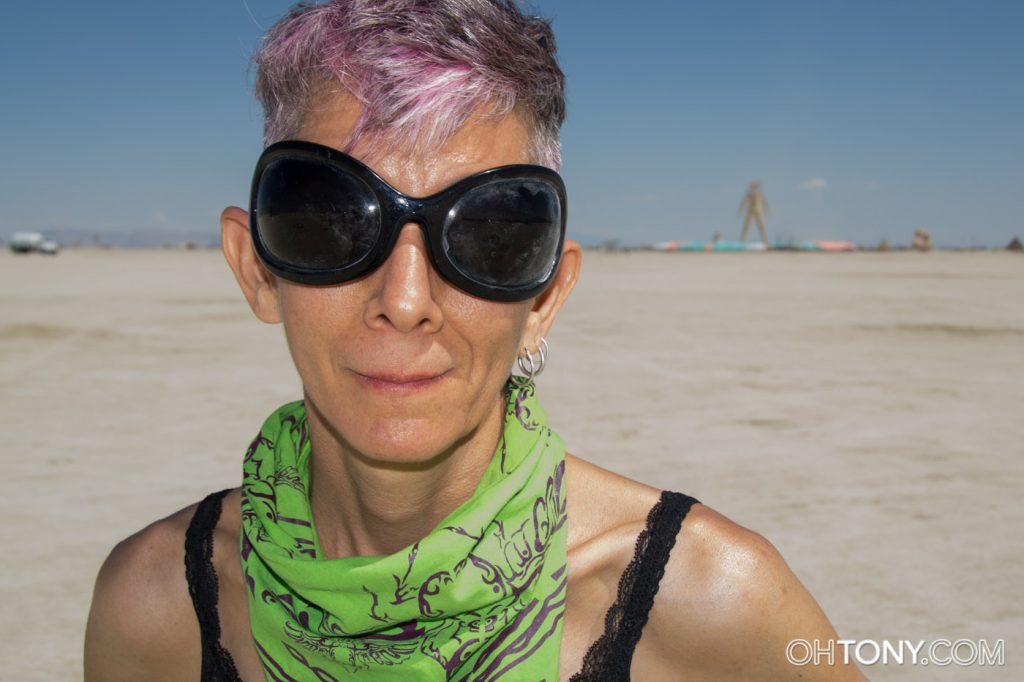 Laura Diamond founded the Project Radical Inclusion project and co-founded the Burning Man camp that brought it to reality, Que Viva. Sadly, she left us in 2015…

“Tony Edwards, a long-term Burning Man attendee, spent last Thursday observing his sixth wedding anniversary at the festival’s temple. He was also returning the ashes of his late wife, Laura Diamond, to the place where they had exchanged their marital vows.

A mother of four grown children, Laura – or Diamond Cutter as she was known at the festival – began coming to Burning Man in her 40s and met Tony there in 2009. She co-founded one of Burning Man’s hundreds of theme camps, Que Viva— a racial and social justice camp.

Laura cared deeply about diversity and expended a huge amount of effort to increase it. I had the honor of exchanging Facebook messages with her about these topics early last October. The following day, Tony and Laura were in a vehicle collision while riding a moped in Los Angeles, which left Tony injured and Laura dead. She was 54 years old.”

Laura’s story and vision, via her personal statement for entry into UCLA:

Two recent, powerful experiences compelled me to apply to WAC, an inspirational course of study, and my subsequent involvement in a social movement. I started at Los Angeles City College in Spring 2010 with the intention of increasing my computer graphic skills and, with them, my employment opportunities. However, I soon realized that I needed a degree to be considered for career advancement, so I decided to get an AA in art and then transfer, hoping my direction would become clear as I progressed. For history, I took an evening class in African American Studies with UCLA’s Dr. Lisbeth Gant-Britton. Several things influenced my decision in taking this class; my mother who graduated from UCLA with a major in Anthropology and a minor in African Studies, the love and acceptance of all peoples and cultures she had instilled in me, and my recent second marriage to an African American. I was so impacted by the perspective of history taught in this course, that I took the 2nd half the following semester. It was during Dr. Britton’s class that I began to see the relationship between all the history I was learning, from Art History to U.S. History and Political Science, my own life’s experiences, and our country’s current socio-economic dysfunction and it’s influence over the rest of the world. I saw the need for greater global awareness, the inevitability of a major shift in our societal structure, and the importance of accessible education. I began to feel a desire to share what I was learning. This new mindset led to what would become the second major event that would propel me toward cultural studies at UCLA; my involvement in The Occupy Wall Street Movement.

Armed with growing knowledge and new perspective, I was excited and motivated last October when I began to see Internet posts about people rising up in New York, the global unity happening via the Internet, and the issues they were addressing. When I saw a rally in Los Angeles I decided to investigate and was so inspired, I was compelled to stay with this group for three months, even to the point of arrest at City Hall when we were evicted. My strength in the Occupy Los Angeles community was in relationship-building, and encouraging tolerance and acceptance of one another. This, to me, is key to the unity needed to enact change. Within three months Occupy LA had formed a community, like a small city, with a democratic governing assembly. We managed our resources, fed and clothed one another, and tackled community projects such as cleanup, container gardening, “peacekeeping,” and education about the issues we were addressing. Artists played a major role, and I found myself involved in many art projects, such as creative sign making, children’s art projects, and T-shirt designs. I juggled school, assemblies, and protests, spending 2-3 nights a week in camp, and based all of my school writing and art assignments on the subject. During winter break, I traveled to Washington DC with 12 people from ‘Occupy San Diego’ on a Greyhound bus, financed by donations from my family and friends. I spent three weeks visiting Occupy groups all over, journaling everything. I met many people from all over the U.S. and beyond, making the same journey, and have maintained contact with many of them via Internet. I am inspired by the growing unity of grass roots activists and responsiveness to the increasing global social unrest. With UCLA’s history of social activism, I feel my experiences and documentation in this movement would be a valuable source for further studies and research.

One accomplishment I am quite proud of is my successful transition back to school, and the strength and determination it has taken to accomplish this. I was not a successful student when I was young. My mother had instilled in me her great love and respect for education, however the process overwhelmed me. I felt frustrated, unprepared and unmotivated even in art, which was my main area of interest. I did not do well and dropped out after two quarters. I was married soon after and spent most of my adult life at home raising my four children, all of who have gone on to college, which was very important to me. This included raising a child with cerebral palsy, and home schooling for four years. In 2000, newly divorced and at a crossroads, I built a career in film and television production doing set and prop design, which I had some experience doing for theater. I spent several years in children’s programming for Nickelodeon and Disney, as well as creating and showing my own art in galleries around L.A. I did quite well until the economic downturn of 2008, when work slowed to an unsustainable rate and I went bankrupt. The challenge I faced in restarting my business, and my age, made me decide to return to school and change careers. Applying the resourcefulness and determination I had cultivated transitioning from raising children to career, I have vigorously pursued my education. Consequently, I have maintained a 4.0 GPA while at LACC. Now, as I transition from artist to whatever is next, I once again feel my direction will unfold as I proceed, but I am considering research and possibly even a doctorate. Whatever I choose, know that I will wholeheartedly and with great determination apply myself to it and succeed.

I am confident that with my collected experiences in life and career, my mature commitment to my education, my openness to all peoples and cultures, and my strong community-mindedness, I would be a hard working asset to the World Arts and Cultures department.

For more of my writing or to view my art, visit my website