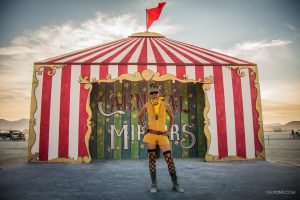 One thing I have learned at Burning Man is that plans almost never go as you expect, and it’s best if you let things just happen the way they unfold. For this reason, long before arriving on the playa, I set aside my many expectations for our camp and for my own projects, being also the culmination of my UCLA World Arts and Cultures (WAC) degree. Even so, I can honestly say that Que Viva! Camp far surpassed any hidden “agenda” I still held for Burning Man or my own project when I landed on the playa this year.

More about my project, here.

To be honest, I was feeling quite discouraged about my Burn this year, my (14 year veteran) husband and I even considering GIVING UP OUR TICKETS AND NOT GOING. Having made Burning Man a school project, I had a lot riding on it, and the growing ticket scarcity combined with the work involved in co-leading our camp this year had left me pretty exhausted and discouraged. Once again, however, Burning Man refused to be limited by my own perspective.

First of all, at the last minute Burning Man Project accepted our proposal for Project Radical Inclusion, on which I had collaborated all year with members from two other camps, IAMU (It’s All Made Up) Camp, and POC (People of Color) Camp, namely Neil Takemoto (IAMU). Burning Man provided three tickets, one for each camp participating, to bring artists of color who lack the resources to make the journey on their own. This news came only three weeks before we left for the playa, and after I had pretty much given up on hearing back from them!

Artist Oree Originol, who had camped with Que Viva! Camp in 2013 after receiving a low-income ticket, was able to pull it together in that short time and join us again this year. 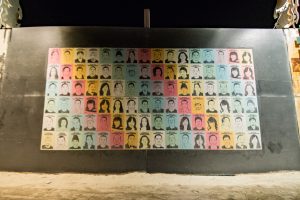 Oree not only attended, he put his iconic posters all over Black Rock City, including a Center Camp mural! Oree brought his project, “Justice For Our Lives,” featuring people of color who have been killed in our criminal justice system, which fit in perfectly with Favianna Rodriguez’ vision for Que Viva! Camp’s theme this year, which included “Black Lives Matter.”

Our camp leadership team this year, Que Viva!’s third, was solid! Setup went quickly and seamlessly, even though we had extra infrastructure to assemble, and the work was spread more evenly among a larger leadership team that we had developed over the year, to insure that leaders would not be over burdened with work as had happened in previous years. Que Viva! founders Brooke and Elba continued in their role as “producers,” organizing everything we needed to get to the playa, infrastructure support, and keeping us going between Burns; our on-playa tasks were headed up by newly appointed co-leaders, and organized into teams.

We had teams for the art projects led by Favianna, DPW under supervision of OhTony and Shamandres, Aaron (whose new playa name this year was “Ladder”) became construction lead, and new to Que Viva! this year, Christopher as kitchen lead. During the year, I worked with Favianna with fundraising as well as organizational tasks, promotion, orienting our new Burners, and communication. While on-playa I became more of a “production assistant,” assisting with organizational tasks and looking after our sizable group of “newbies.” I was very impressed with the well oiled machine that Que Viva! had become. Additionally, In response to what we had presumed to be unavoidable conflict in a camp full of social justice workers with strong opinions, we had even brought a “conflict mediator,” who thanked us at the end for HAVING NO CONFLICTS. We had a great team, or maybe family.

Upon our arrival on the playa I was pleased to find POC Camp, one of the other camps participating in Project Radical Inclusion, placed right next door and the first of their members to show up Uncle Vern, with whom my husband Oh Tony and I had become acquainted this year in an online BRC Census Diversity working group! Many of our campmates attended the Diversity Data Bash at the BRC Census with us on Thursday, where Uncle Vern, who led the “Black on the Playa” event last year, and Scribble from the Census, discussed their research about racial and economic diversity in Black Rock City. Our neighborhood this year, which included the Jazz Café situated on the other side of POC, formed deep bonds that we talked about developing further next year.

On Tuesday, Joshua Lease and Crimson Rose from Burning Man Project fulfilled their promise of a meet-up with those involved in Project Radical Inclusion to discuss the project going forward. In attendance were the three recipients of the gifted tickets, camp leaders from the three participating camps, a Burning Man film crew, as well as our own resident documentary team, David Weinreb and Anne Cohen, who joined us this year from Mount Hollywood United Congregational Church. I will post more about this in the weeks and months to come, but the overall outcome of the meeting was positive and encouraging.

Anne, minister of Mount Hollywood UCC, and parishioner David (my step-father) were both at Burning Man for the first time, and hoped to bring home fresh vision to invigorate their church community. Anne, whose father was also a minister, had grown up believing that activism and church went hand-in-hand, and feels that the principles of Burning Man match those of the direction of MHCC. She and David were an integral part of Que Viva! Camp this year, and brought with them an altar of MIGRANT ARTIFACTS FROM SOUTHERN ARIZONA, designed by Jim Burklo, Assoc. Dean of Religious Life at USC. This traveling installation, collected and assembled in Arizona close to the US/Mexico border by local artists Antonia Gallegos and Valarie James,

displays items found on migrant trails in the Sonoran Desert, left by exhausted migrants shedding their belongings to lighten their loads. Jim, whose teaching schedule prevents him from attending the yearly event himself, is well acquainted with Larry Harvey, and was excited to have this altar come to Burning Man. Many tears were shed in Que Viva! Camp this year at this evocative alter.

Mount Hollywood UCC also funded Que Viva! Camp’s tent shade structure, a very welcome and necessary improvement to our infrastructure this year, considering the majority of our members were in tents!

One unexpected development for Que Viva! Camp this year was becoming a central hub of community organization, sharing our space to host events, engaging in conversations about diversity, and drawing people from all over BRC. Before even leaving for the playa Que Viva! Camp was approached by a group asking to hold a “facilitated dialogue about racial justice” at Que Viva! Camp, which several of our members joined and assisted with on Wednesday afternoon. Uncle Vern and Nick from POC Camp also held a workshop in our space on Saturday morning – a “cultural jam session”- that Uncle Vern says “was well-attended and well-received by many, including passersby who joined in the fun.  There were tears aplenty, confessionals, and friends made.  It was quite magical.” 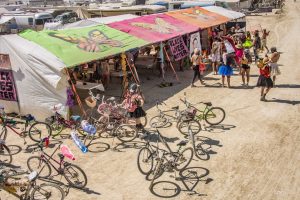 Like-minded people, people of color, media and allies were drawn to Que Viva! Camp. In addition to our “Migration is Beautiful” project this year, Que Viva! Camp featured “Black Lives Matter” themed banners by artists Favianna Rodriguez and Oree Originol. One woman, new to BRC, who on day two was drawn into Que Viva! Camp, later mentioned Que Viva! in her otherwise highly critical reflection, “Black Rock City: A Black Queer Woman’s Perspective.”  She writes, “I happened upon one of the most beautiful and meaningful camps in BRC, Que Viva! camp” and upon meeting OhTony, “gave him a huge hug and told him how finding this camp meant everything to me that day. Seeing “Justice for Mike Brown” and “Black Lives Matter” banners helped me to feel less isolated. I knew there was at least one place for me to go to find like-minded people who care about the things that I care about.”

Que Viva! members spoke about social and racial justice all over BRC: in TEDx Talks, cultural gatherings, and even on BMIR (radio station). Que Viva! Artists were approached all week for interviews by journalists from on and off playa publications, e.g. Steven Thrasher for his articles in The Guardian, including his most recent about being Black at Burning Man. 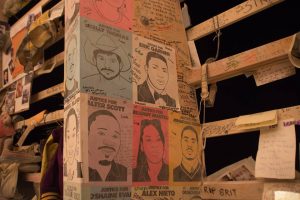 Oree’s installation in the temple was powerful, drawing many heartfelt responses from others, some who had known the people pictured, others who wanted to support. After the Burn it started a conversation on social media disrupting one of the snarkiest of Burning Man Facebook pages, with people on both sides of the convo taking a break from snark to respond seriously, both opposing (i.e. the original post) and defending its placement, with the overwhelming majority coming out in support!

Finally, I had worked all year on a performance I produced as my senior project for WAC, performing in a showcase with 16 others from my graduating class. My piece, “Dear Burning Man…” , was written for the BRC community, then re-written and performed for a UCLA audience, with the intention of eventually performing it at Burning Man. 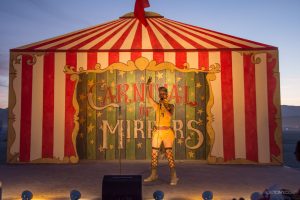 To my great delight, I performed at Sunday’s grand opening on the Carnival of Mirrors stage at the Midway this year, a theatrical conversation with 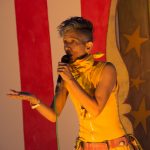 the actual Burning Man standing right in front of me! I cannot describe for you the sense of accomplishment I felt in delivering my monologue in that environment, to the audience for which I wrote it – those who were building the city (admittedly being mostly my own camp, friends, and those working in the Midway who heard me yelling to the Man). I will post more about my performance, some video, and its relationship to my overall project in the coming weeks. 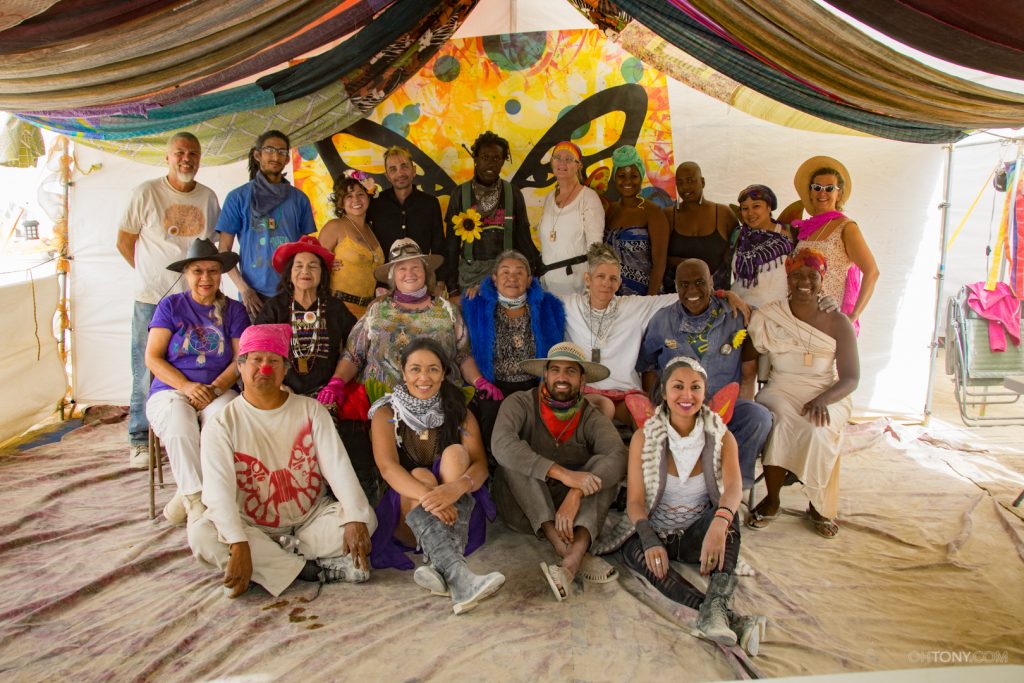 The sense of community support and solidarity that rose up this year, with Que Viva! Camp a central player, went far beyond what I had hoped for when I invested myself so deeply in Burning Man. I realized that “my project” was no longer “my project,” adopted by Que Viva! Camp; it was my voice adding to a larger diversity movement that was happening in BRC, one of which Que Viva! Camp has become an integral part. Once again, I found that my vision of what happens at Burning Man did not measure up to the magnitude of what is actually happening at Burning Man.

I headed to the playa exhausted and feeling it may be my last year; I returned excited (still exhausted) and looking forward to what will happen next! Oh Burning Man, how could I ever leave you?