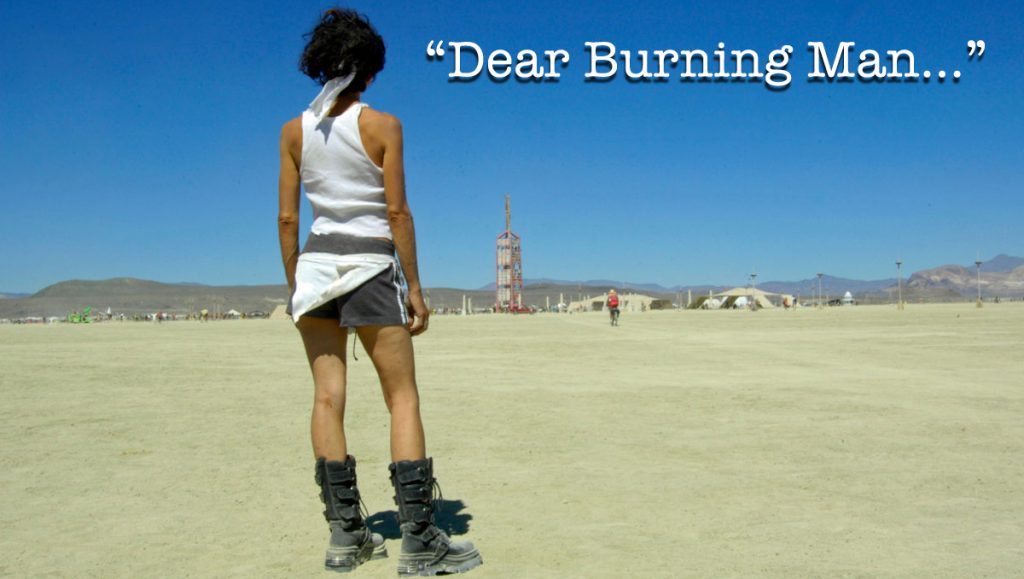 Read here for an exciting update on this project!

Greetings! My name is Laura Diamond (Diamond-cutter). I am a seven-year Burner, who like many restructured my life because of my experience at Burning Man, and am committed to the ethos reflected by the Burning Man Project. This is not a festival, it’s a community. It’s my community. However, I have been wrestling with something I see as problematic that I think is vital to the well-being of our community, both on and off the playa, especially as it grows: the inadvertent exclusion of the economically disadvantaged from our Radically Inclusive city.

It was 2007, my first year at Burning Man, and I was sitting on the front line to watch the Man burn, the  culmination of a truly transformative week. Indeed, it was to change the course of my life on many fronts: my community, my relationship status, 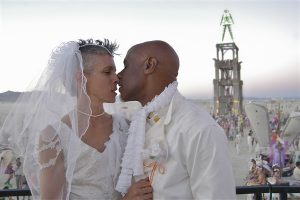 how I interact with my environment, spiritual awakening, empowerment that led me back to school, even my course of study at UCLA. But as I sat there enraptured that first Burn night, some old-timers next to me began to grumble and complain about being told to “sit down,” the first negativity I had encountered all week; I was amazed they could find something to complain about. As they launched into a tirade about how “it’s not like it used to be, we never used to have to sit down, never used to be told what to do,” several things became clear to me: Burning Man is organic and as it grows it is bound to change. And when it got be too “something” for me, as I assumed it inevitably would, I would take it as a sign to move on and let the next “group” experience this magical social phenomenon. I have come to understand the grumbling of the old-timers, mourning the loss of the one place they can come and be themselves, be it shooting guns, driving fast, or standing dangerously close to a raging bonfire. However I value even more the organic nature of the event as it inevitably grows, the experiment continuing with each new challenge it must find a way to solve. Burning Man teaches us not be a spectator in life. We have the power through participation, to influence our environment. We are making Burning Man up as we go, and if there is need, then it is up to us to try to address it. With this in mind, I decided to stay and try to have an impact on on the growth and future of BRC. I am still here; this is a love story.

I have spent a great deal of time and resources wrestling with the issue of economic exclusivity in BRC, which sprung from both my intense love for Burning Man and my own views about and experience with poverty. I have been poor all of my life, raised with my 3 siblings by my single  mother who worked while putting herself through school. Married young, I stayed

home to raise my own four children, a decision I don’t regret, but which left me without a career or higher education at 40 when my first husband and I divorced. After my budding career in set and prop design collapsed in the economic downturn in 2008 and I went bankrupt, I returned to school in 2010 to get a degree.  I attended my first Burn on a $95 scholarship ticket with ten cans of tuna and the entire contents of my set-dressing/props kit for gifts. 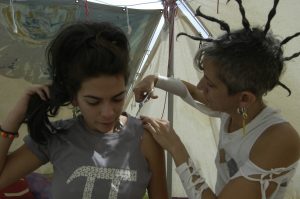 Despite my lack of money, I never felt poor in Black Rock City, I felt valued; I felt free. My own gifts meshed with the network of the community as though I had arrived with a position to fill without even knowing it. It was magic to spend a week in a city where I did not have to think about what to spend my limited funds on, where I was free to interact with people whose goal was to give to the community, not to extract money from it. If one has not lived with the limits placed on them by a lack of money, it may be difficult to comprehend the impact it has when this restriction is lifted.

On the other side of this, persons not bound by poverty have an opportunity to spend a week, perhaps for the first time, without thinking about if their activities are “profitable,” what to sell to the community, or if the people they engage are “customers.” Those whose money can buy them ANYTHING come to this desert as well, looking for something their money can’t buy them, otherwise they would not need to come all the way out here to this dusty uncomfortable desert. Burning Man is not just a festival, a party, a rave; these things can be found anywhere, especially if one has money to buy them. It’s an idea, a different way of being, that has proven transformative to the lives of participants. 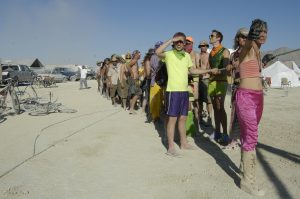 The interconnectedness with our environment at Burning Man is something not readily available in our world of commodities; we are isolated consumers measured by and operating out of our individual buying power. 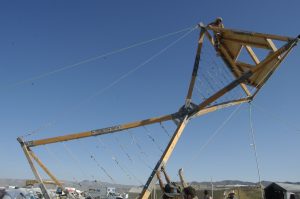 This freedom from measuring one’s interactions by economic worth, is only  one of the many culturally significant observations I have made about the experience of Burning Man.

In the past few years I have come to recognize my own privilege in life, despite my economic limitations, even in getting myself to Burning Man. As an artist in LA, I had connections to others who went to Burning Man, one of whom offered me inclusion in his theme camp, providing valuable material and cultural support even before I arrived. I owned a vehicle capable of transporting me and my things to the desert, and had a gas card thereby deferring the cost of fuel. I had my own camping gear, and an entire work-kit that included many items of use to my camp and for gifting: batteries and tools, sunglasses and water bottles. In other words, there were resources beyond economic that enabled me to comfortably make the journey. As a person devoted to social justice and diversity, as well as to what is happening in that desert, it began to bother me that the cost of attendance – even beyond the ticket price – naturally excludes some people, who may not have even the resources that I did. In recognition of the inherent inequality in our now global socio-economic structures, I began to ponder what could be done about the limitation in our plan for “Radical Inclusion” and if our BRC community would embrace the idea. My belief in the power of Burning Man to change the world, including how the world views and responds to poverty, made me want to stay and try to have an impact, to “make Burning Man” for others, rather than simply move on. 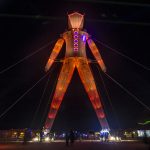 As we grow and tickets to our de-commodified city of creative  abundance become more difficult to acquire, the event itself is becoming an increasingly scarce commodity. Given the cultural significance I see in Burning Man, its radically inclusive environment, and its transformative potential evidenced in a multitude of participant reports, I am not comfortable with the inadvertent, but growing exclusion of the economically underprivileged from BRC. My idea is to address the growing ticket scarcity and income imbalance within our community by doing what it is we do here: Gifting. As founder Larry Harvey put it, “… if just a quarter of our [mainstream] economy were based on the giving of gifts, it would be a very different world.” Why stop short of gifting admission to the event itself? If we truly wish to change the world, we need to start in BRC.

There are people who are gifted tickets to Burning Man through their involvement in a camp or project, or who volunteer for tickets, as well as a low-income ticket program, funded by the extra income generated by the pre-sale ticket sales. But to the poor artist off the street, who doesn’t have a Burning Man community, in a city run primarily by volunteers, how accessible is this? The community’s increasing median income (the Census indicates a 17-19% increase from 2012 to 2013, with another 8% increase for 2014) as tickets become more scarce, would indicate these measures are not enough, if our goal is truly Radical Inclusion. Working on an Art installation, or Center camp, or a theme camp, in exchange for a ticket requires a certain amount of insider knowledge or intervention; as the website states: “Unlike many other events, volunteering at Burning Man does not automatically equal a ticket. If it does occur, it usually applies to volunteers who work within the organization year-round and are highly accountable. These are not roles that are easy to jump into.” And all of this skirts around the issue of the Gift, rather these situations are a “barter,” and not readily available to new participants. What I seek to do is to make people the project, in recognition of the life-changing experience that is Burning Man. 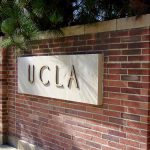 My major at UCLA was World Arts and Cultures (WAC), learning about the power of art to change culture. I used my time there to study and focus on Burning Man and the issues of diversity and inclusion I want to address, writing a number of interrelated research papers on the subject. I also joined the Black Rock City Census for a quarter as a directed study project, assisting in a Diversity working group to explore the various issues of racial and economic diversity facing BRC, such as the drastic increase in median personal income reported in the census. For my senior project, performing in a showcase with 17 others from my graduating class, I created a theatrical piece about the cultural significance I identified in Burning Man and my relationship to it. I will be performing (a version of) my piece, “Dear Burning Man…” at the Man Pavilion stages this year in BRC, schedule tbd, to which I invite you all- I wrote it for you. 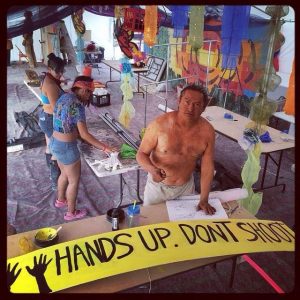 My camp Que Viva! hosts artists and activists from a variety of economic means, often gifting tickets and assisting with resources for sponsored artists.  However, our resources are tapped out, and ticket scarcity has created a climate that makes gifting difficult, and getting tickets enough for our core camp has been challenging enough, let alone extras to gift new members as we had for the past two years. In order to truly address the scarcity of tickets with the concept of Gifting, it will take the participation of the community and the

support of the Burning Man Project.

This year I partnered with members of two other theme camps in submitting a collaboration *proposal to the Burning Man Project for creation of a more formalized, workable sponsorship that could be adapted by any participating theme camp for “Gifting” the Burning Man experience to artists of low economic means and underrepresented populations, for which we  await a response. My proposal is a social experiment within our social experiment: What would happen if we Gift Burning Man to artists who can not possibly afford to attend, not only in the lives and communities of those receiving the gift, but also the affect on the Burning Man community?

In the words of founder Crimson Rose, “To give of oneself without any thought of return is the truest form of gifting.”

For more about me, my art, or my project, please visit my website.

*Read here for an exciting update on this project!