Que Viva is the name of our Theme Camp at Burning Man, a group of artists working for social justice, founded by Arts Attorney Brooke Oliver and Juanita Chavez , daughter of civil rights worker Dolores Huerta, with her husband Rich Thomas. Que Viva engages the community in art projects intended to give people new ways of thinking about social issues, such as immigration. 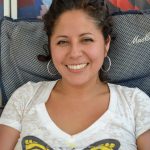 Resident artist and activist Favianna Rodriguez of Culture Strike brought her project “Migration is Beautiful” for the last two years, engaging the community at Burning Man in making hundreds of Monarch butterfly wings, 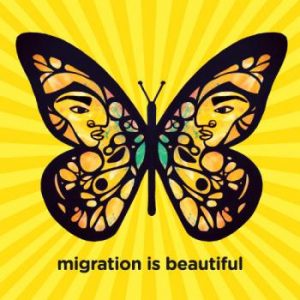 using the image of this creature, which migrates from Mexico through the United States into Canada, to symbolize the natural instinct and right of all living creatures to migrate. Favi’s design features a human face profiled in each wing as a way to humanize the concept of migration and change the way people view migrants. Along with the wing workshops, Que Viva video records people’s migration stories, adding them to an archive and projecting them out onto the playa (ground) at night, and issues participants “BRC Permanent Residency Cards.”
This year Que Viva made 400 butterfly wings with the community, recorded migration stories including that of a 91 year old first time Burner, and wrote letters to the tens of thousands of unaccompanied children being held in detention centers on our borders. 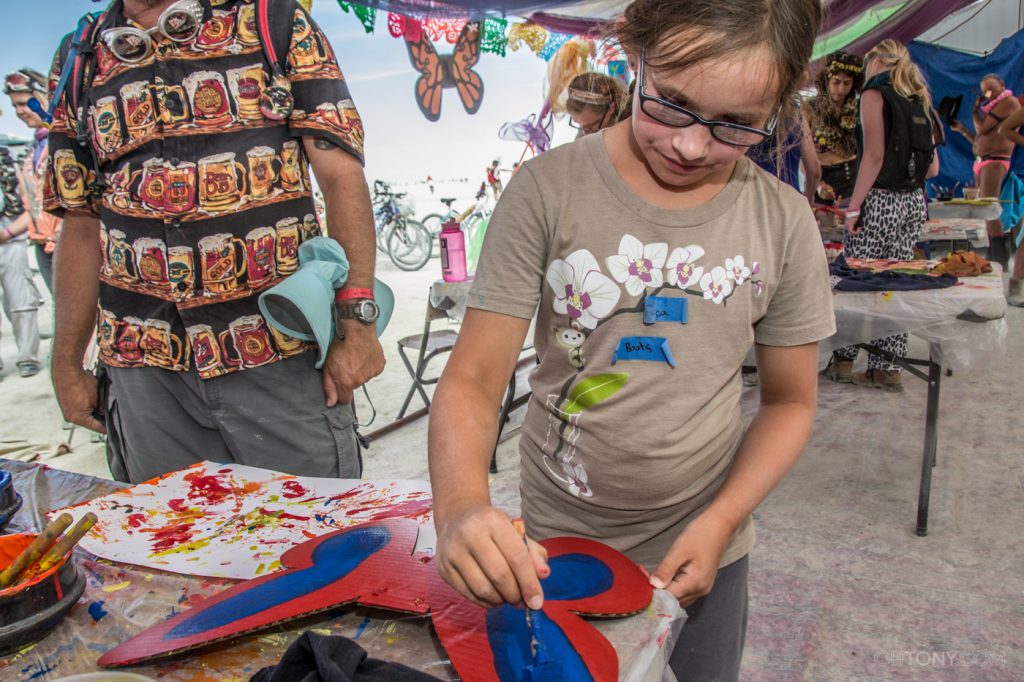 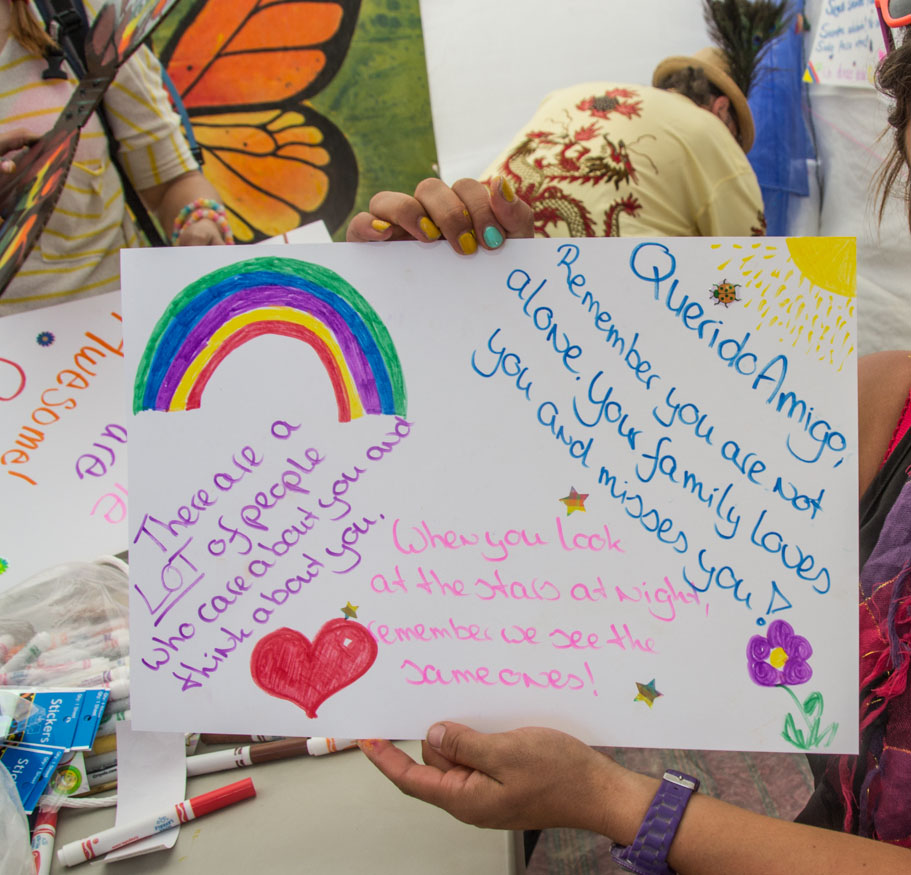 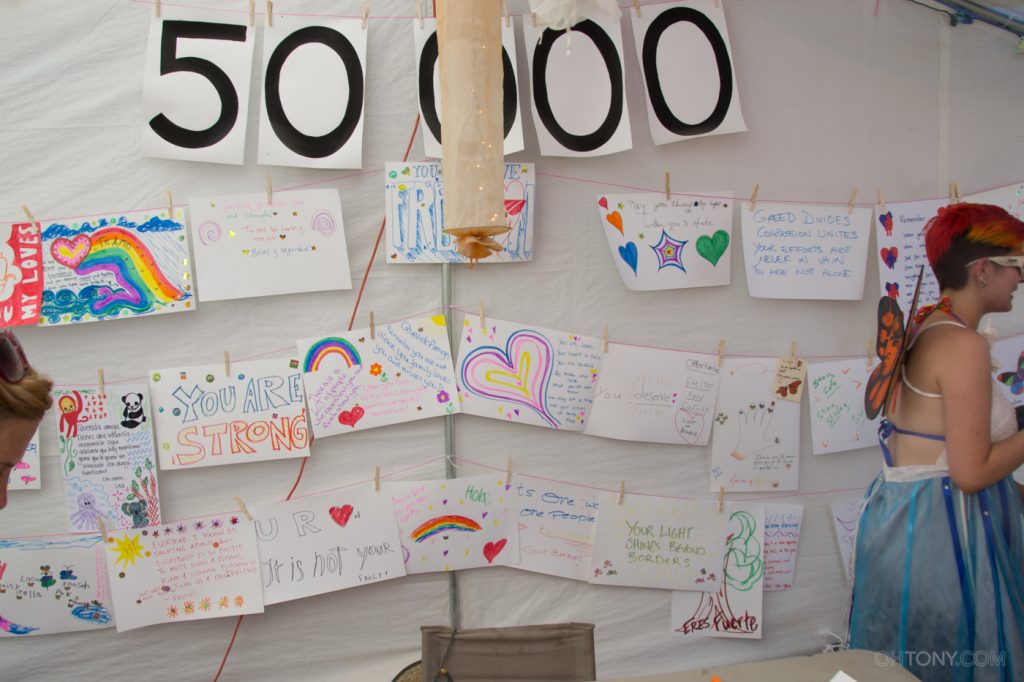 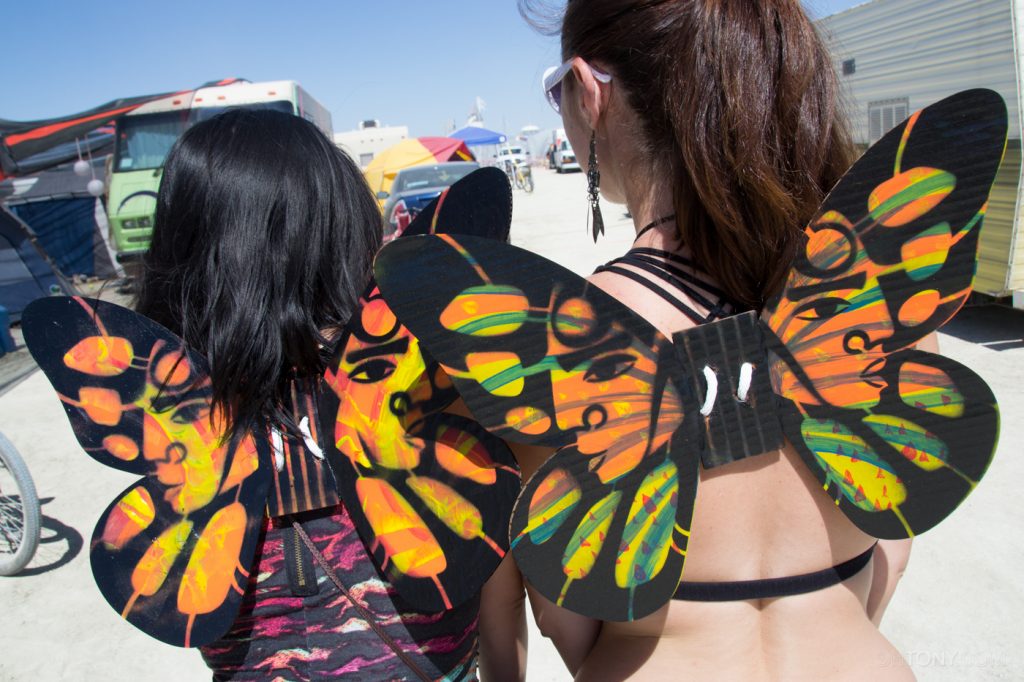 Participation was optimal, people seem to love this camp and we were very busy all week. People of color would gravitate towards us, and stop to talk to us and find out what we are about. 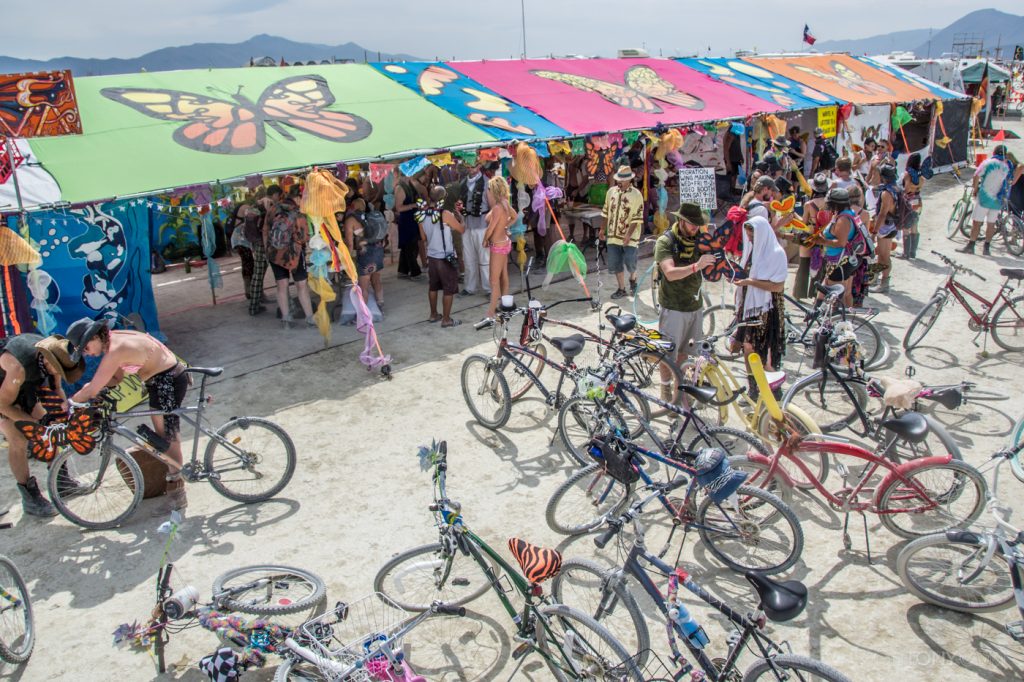 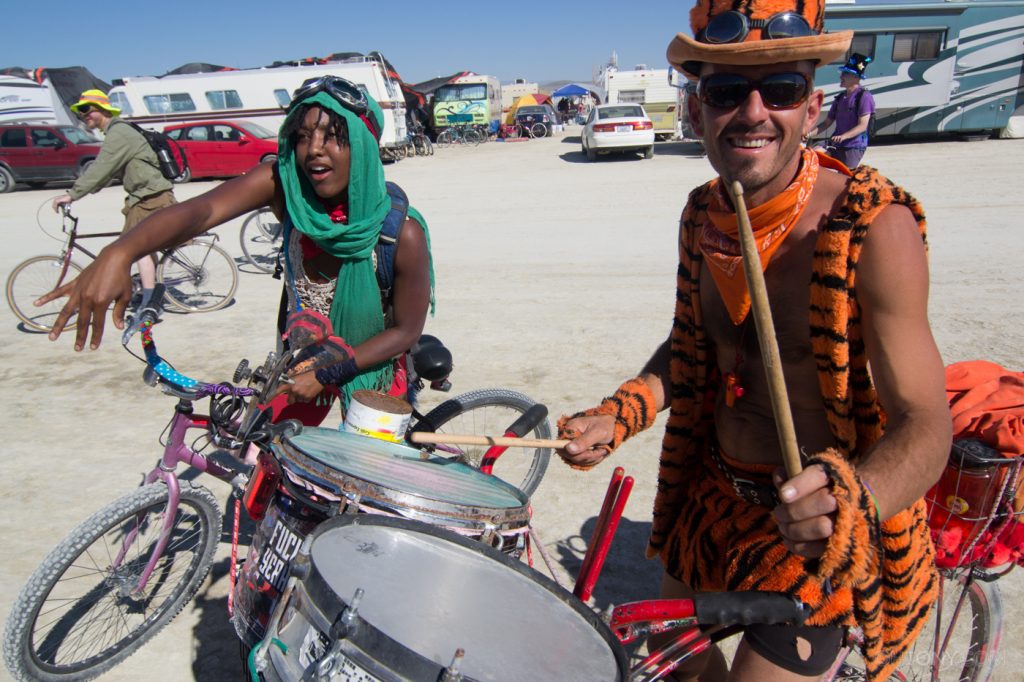 Late at night one of our members, herself being a night owl, would sometimes grill quesadillas to give to passing hungry Burners who responded as though the snack had dropped from heaven. When not being used for art workshops, our art tent is full of hammocks for weary passersby, which in the morning are usually filled with sleeping people, often in pairs.

Here at Que Viva we like to bring comfort to the Playa, an escape from the harsh elements. Our camp “chill space,” for use by camp members and their guests, is a combination dining hall and lounge, with pillows and hammocks for our own use in the heat of the day. This year, in keeping with the theme of “Caravansary,” one of our members had sewn together yards and yards of fabric with which to drape our shade structure, and hung lanterns and other decorative elements, which transformed the space into an oasis.

It was Que Viva’s goals, dedication to social justice, and the attitudes of its members, that convinced me to approach them that first year in 2013 with my concept for a project aimed at increasing access to Black Rock City for low-income artists, particularly artists of color. Brooke Oliver, pictured here with her wife Elba, in particular impressed me in the way she behaves in her community, both here on the Playa and at home in the Mission district of San Francisco, where she knows and greets everyone as we walk down the street. She freely gives to and invests in the people around her, using her own resources to the benefit of others, both professionally and personally. At Que Viva we are a diverse mixture of “races” and economic levels, with those on the upper end of the income scale “gifting” tickets to those on the low end of the scale.  This, along with their focus on art for social change, caused me to consider approaching Brooke with my crazy idea for a social justice project at Burning Man, which I have named “Project Radical Inclusion,” after one of Burning Man’s Ten Principles. 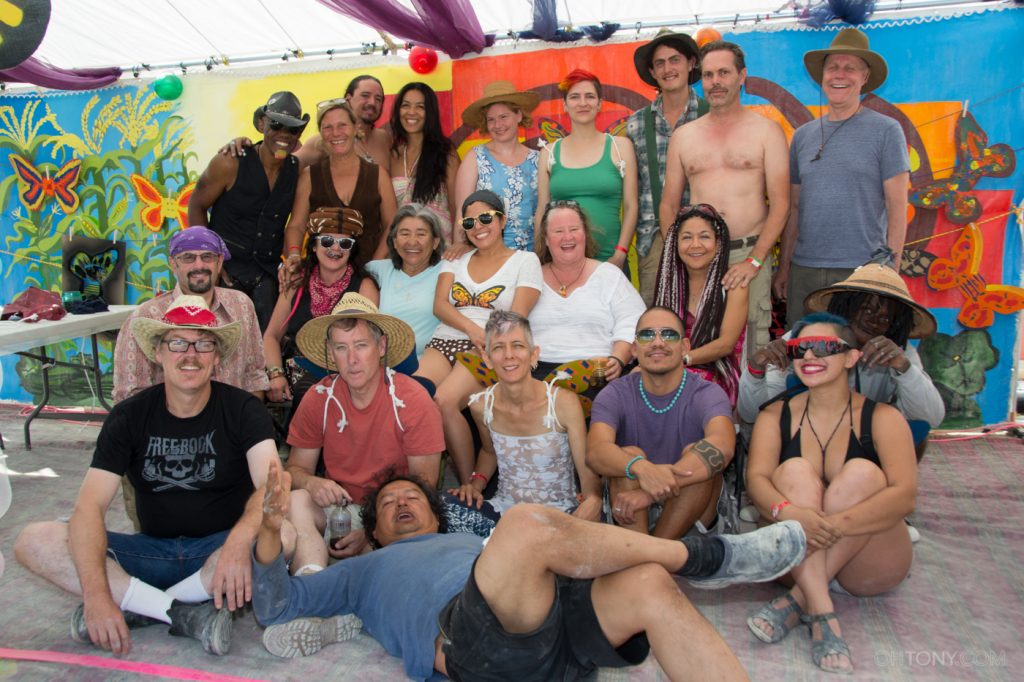 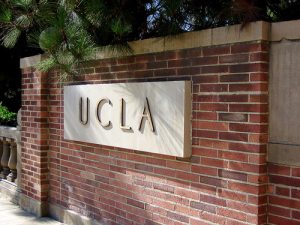 My project seeks to expand this concept to an entire camp dedicated to this gifting, with financing coming from the larger community, not only for tickets, but also the infrastructure to house them, and supplies needed for survival.

Que Viva’s enthusiasm for my concept convinced me of its feasibility and encouraged me to submit it as a proposal for my senior project in UCLA’s World Arts and Cultures department, where I await its approval.

This year, Que Viva camp members spent more than $18,000 increasing our infrastructure and art materials for camp, purchasing shade structures, tables, camp kitchen equipment, creation of a shower trailer, and a used RV which serves as both storage for the infrastructure- which will reside in Nevada during the year- and as sleeping quarters for guest artists, with extra kitchen and bathroom facilities. 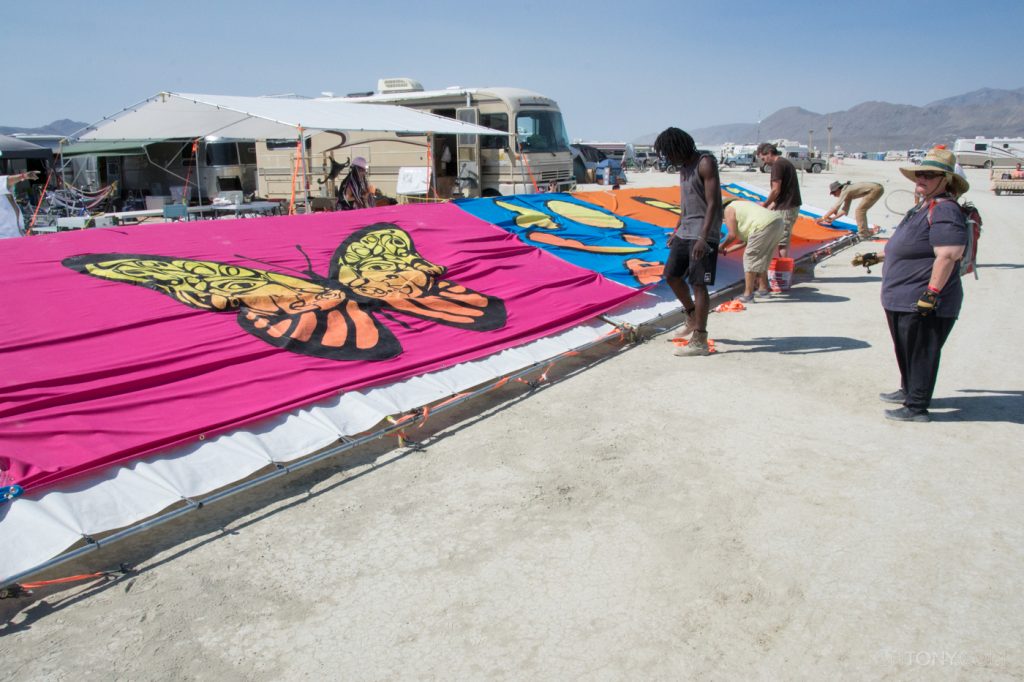 This increased infrastructure is designed to provide the base for a returning Theme Camp with the ability to grow as new members are added. What is still needed is what I am calling a “tent village”  for housing our tent campers and participating artists, funding for  supplies and basic comforts, such as sleeping bags, bicycles, lights, wheelchair accessible Porto-potty in camp, and art opportunities for participating artists. I would also love to see the addition of a performance area, so we might include performing arts and artists in our expression. However, our camp’s resources are tapped out, and if this gifting is to continue or to grow, as my project would suggest, we need the participation of the larger community.

My project was inspired in part by the increasing number of what the BMorg is calling “Turn-key” camps, where “producers” create a Burning Man Theme Camp for wealthy clients who pay them large sums of money for a packaged Burning Man experience. There is much controversy among the Burning Man community about these camps and the lack of participation of both the producers and their clients, and the commodification it has brought to the Playa. You can read about the controversy over these camps on the Burning Man social networks and websites, such as this story on Burners.me, “A Sherpa’s Tale,” about one of the most offensive of these camps. I am not among those who protest the inclusion of such camps at Burning Man, as I recognize the value of allowing the “magic” of Black Rock City to influence the wealthy in society, and their likely inherent inability to engage in the labor necessary to attend. Though the potential for un-Principled behavior from these camps and their guests is high, and the fears of the community seem justified in some circumstances (such as the above story), I have come to believe that the organic nature of Burning Man and the integrity of the BMorg has the potential for transformation, even among those who can “buy” anything they want. Burning Man, which Larry Harvey calls “an empty void…a blank slate,” seems to cause all things to be visible unto itself, the art and the behavior of the residents, and those who “buy” their Burning Man experience, or attempt to “sell” it to others, are highly visible and for the most part rather out of place, as evidenced by the ruckus they have caused. BRC is a city of participants not spectators, and I presume many of those residing in these camps felt the separation, and like many of us long to be more a part of it; it is the nature of the experience.

The goal of Project Radical Inclusion and Que Viva is to take the concept of providing a “packaged” Burning Man experience, and give it to those who are unable to provide it for themselves on the other end of the economic spectrum: those who would be unable to attend because of the cost. As residents of Black Rock City know, the cost of attendance goes far beyond the cost of a ticket, which is a considerable amount alone, currently between $300-400. A glimpse at the Burning Man “Survival Guide” will give you an idea of how much preparation is needed for survival on the Playa, for both safety and comfort. We would like to create a full-participation camp at Que Viva, which is dedicated to not only bringing messages of social justice through community art workshops, but engages in creating more balance within the BRC community itself by increasing access for low-income, underrepresented artists.

This year, (2014), members of Que Viva bought 10 gift tickets for others, many of them attending for the first time. Some of these were friends; others were “art interns” who came to assist Favianna with the art workshops. Que Viva also hosts “guest” artists and activists, such as civil rights activist Dolores Huerta, or UCLA Chicano Studies professor Judy Baca. All members of Que Viva participate in the community art workshops, as well as the tasks associated with camp function. Artists are encouraged to engage in any personal art projects they want to bring, such as mural painting, and plans for art installations and a camp art car are being discussed.

Included in our budget for next year, and before any discussion of details with the camp, I would personally like to see at least double our “gifted” tickets, as well as creation of an inexpensive but comfortable, shaded “tent village” for housing them. My husband and I (13 years and six years respectively) for cost reasons have been almost exclusively tent campers at Burning Man, (though now in our fifties and feel we are more than ready for an upgrade in BRC living arrangements), and I feel it is a reasonable solution for creating housing that will grow with us, for now anyway. I would also like to be able to provide bikes, lights, a wheelchair accessible Porto-potty, and even a certain amount food and water for participants. We will work with what resources the participants do possess, and supply what is needed. Along with the “package” comes education, orientation into the culture of Burning Man. Our “newbies” this year can attest to the relentless training they were subjected to before and during the Burn, such as this Orientation document I created, using the Survival Guide and Burning Man website to inform and link to important points. For next year, I would like to see more community art opportunities for our artists, such as performance or painting a mural at center camp, an on-playa installation, or an art car build that a team can work on all year.

This year I also organized a presentation, serving breakfast while talking to attendees, along with Favianna and Brooke, about the project and the goals of Que Viva. I was pleased with the response I got as I circulated and promoted the presentation during the last couple of days before the event opened, passing out these stickers I had made with a logo I created, promoting ProjectRadicalInclusion.com, along with my printed invitations. I went to “First Camp” and met several of the Burning Man founders, including one of my current heroes Larry Harvey, in whom my respect has multiplied over the past year as I studied the origins and history of Burning Man. 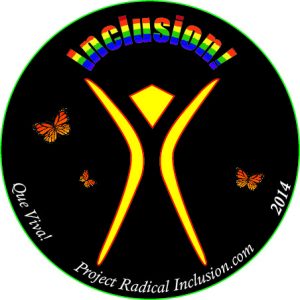 Founder Steven Raspa attended the presentation, giving us encouragement and his own ideas about how to include artists and storytellers by way of “art grants.” 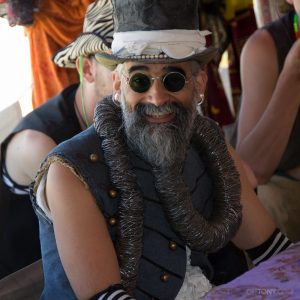 I have witnessed amazing projects materialize like “magic” when members of the community come together with purpose, and my faith that BRC will embrace the opportunity to witness the results of this act of “Gifting” is strong; I am optimistic. I will be spending the next year shopping this project around, in search of organizational and financial backing, as well as developing an application process for participating artists, in collaboration with my campmates. If this sounds like a project you might be interested in, or you have a group you would like to present with this project, please contact us using the form provided on the website.

If you would like to know more about me, Laura Diamond, my research, writing, or reasons for choosing to engage in this project, please visit my website.